My image of the week this week is by Adrian Ghenie. A Romanian painter, based in Berlin. Ghenie draws his inspiration from personal memories of growing up in communist Romania under the dictatorship of Ceausescu.

A series that I am very fond of are the paintings about Nicolae Ceaucescu and his wife Elena. Adrian takes the viewer on a journey through some of the darkest states of human existence – oppression, abjection, tragedy, persecution, poverty, loneliness and misery.

If you don’t know much about Ceaucescu, he and his wife Elena were brutally executed by a secret military tribunal which found them both guilty of genocide and crimes against the state. The trial lasted for just under an hour. Here are two living people, once powerful rulers of their country, now defenseless, about to become dead. This image really caught my attention. Adrian paints how he envisions the couple’s day in court. 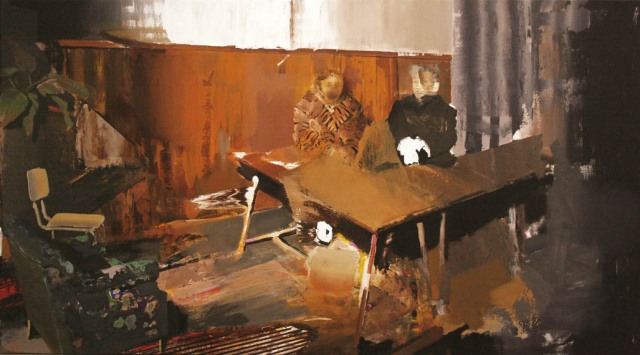 Artist - Painter, Sculptor Lover of Taxidermy Girl Friday
View all posts by Karley Burgs →
This entry was posted in Picture of the week and tagged Adrian Ghenie. Bookmark the permalink.