Selene Simcox in Residence – An Interview

Auckland artist Selene Simcox is in residence at Manthel van Reijn Studio (Mt Eden) from 21 February to 11 March and continues to explore the relationship between paint and vinyl and the role that performance plays in her work.  I caught up with her last weekend to discuss her work and to find out a little more about her.

Selene has an open studio starting Monday 7 March to Thursday 10 March, 10am – 6pm.  She will also be having a one night only exhibition to show the work she has produced for her residency. This is on Friday 11th March, 5.30pm to 7.30pm.  Don’t miss it!!

KF:  Tell me a little background about yourself.

SS:  I came to art by chance; I enrolled in art school at the beginning of 2006.  I have a BFA from Whitecliffe College of Arts and Design.
Art has become my life; everything I do is connected to art in all sorts of different ways, whether it’s Gallery36 or friends who are artists or making my own art. I love paint; paint is one of my most passionate affairs. There are two sides to my creativity, one is the more academic side, and the other is my more expressive side (which is my graffiti and pop art) and I make that because I want to enjoy it.  I’m not worried about presenting that to the art world, it feels almost like a by-product of being such a creative person and having so much energy it’s how I channel and express a lot of my emotions through that side of work.  The current work is looking more at the medium I love, which is paint.  But also about being calculated and analysing and talking about rules and contextualising.

SS:  I’m a graphic designer by trade, so in my 3rd year at Whitecliffe I had a little idea in my head about how hard it is to be an emerging artist.  Quite often I was recognising that NZ has a little bit of a problem that we are all feeding within the same market and NZ is such a small country.  I realise if you go to New York you have twice as many artists, so you have the same problem, but you have a wider population that is more accessible like the Australian artists.  So how do emerging NZ artists tell Australia that they are there?  I’m an emerging artist and I was thinking what am I going to do, what is out there for us and what do I want to make happen? So that is where the Gallery36 idea came from.

SS:  I’ve been very lucky, it’s been well received.  It’s growing and constantly growing and taking on new challenges like looking at artists who are working overseas.  We have recently introduced articles to the magazine to make it more open to a variety of readers but to also give the mag more ethos and stability. I started in 2009 and just went for it.  The first people who were published were friends who had just graduated from Whitecliffe.

KF:  It’s the best way to start though, by doing things with your fellow art colleagues. I recently talked to Rob Garrett about a similar topic.  It’s really important to have those peer relationships and you probably have a lot of connections from doing this.

SS:  I have, Gallery36 has helped me a lot.  But it took 2 years to get me in there.  I was of the opinion that because it’s my magazine I can’t profile myself, that’s just the nature of my humbleness, if you like. I didn’t want to be seen making the magazine purely for my benefit.  But now I have a good reason.  The contacts you have are so important, and supporting everyone is also important.
You know Tracey Emin right? From YBA (Young British Artists).  The thing that got them started and why they got talked about is because she and a bunch of grads (including Damien Hirst) got together and exhibited in run-down buildings.  That needs to happen as far as I’m concerned.  It doesn’t have to be in a recognised gallery, it’s about generating a movement that will then attract attention.  And you actually have to be creating that energy for someone to go “have you heard?!”  As emerging artists we have the flexibility to show where ever we want.

KF:  What are some of the driving inspirations behind your work? I’ve noticed your earlier work is a lot different to what you are producing now. It’s like you’ve simplified the early graffiti stuff you used to do.  In your blog you talked about being interested in the movement and the performance of painting.  And because graffiti is so expressive I feel like your current work is a minimal take on the graffiti art you were doing.”

SS:  I am a little bit scared of being labelled or attempting to be a minimalist, because I’m more about looking at process art.  But there are two sides to me and my practice.  I still continue with the graffiti work and the expressive work, but this is about using the elements of that raw energy and the performance.  So a lot of my mark making is very performative, I’m taking the concept of performing and have broken it down to when you perform something you naturally have an outline you have to follow, a certain act and maybe a series of rules.  There are rules of what you do, what you don’t do and how you put that across to the audience.  The performative element is almost interpreted in a theatrical way, where I’m setting rules and boundaries for the work.  Like one of my previous works was on time, one panel was one second, one was 2 seconds and the other was 3 seconds.  I’m performing but within a boundary.  I guess I have broken down all of the abstract large bodily movements that are made to paint into a narrow field where I am interpreting them within a set of rules. And that’s what process art in the 60’s talked about.  That it has a workman like approach to the painting.  But the catch is: can you claim it is performative when there is no one to view it?  It wasn’t performed live, so you then ask does it have to be documented with video? Can it be performance, even though I perform it within a set of rules, the viewer doesn’t necessarily know those rules.

KF:  So the inspiration behind this series is?

SS:  Responding to the paint has been a big thing.  I came in with an idea that I wanted to continue working with vinyl and paint and push the boundaries for what I have established for myself so far.  I wanted to be able to do this but respond to the space at the same time.  The fun thing that happened is a friend encouraged me to raid the rubbish bins at Omni Graphics.  I found new materials; it’s still plastic, but different forms of plastic. 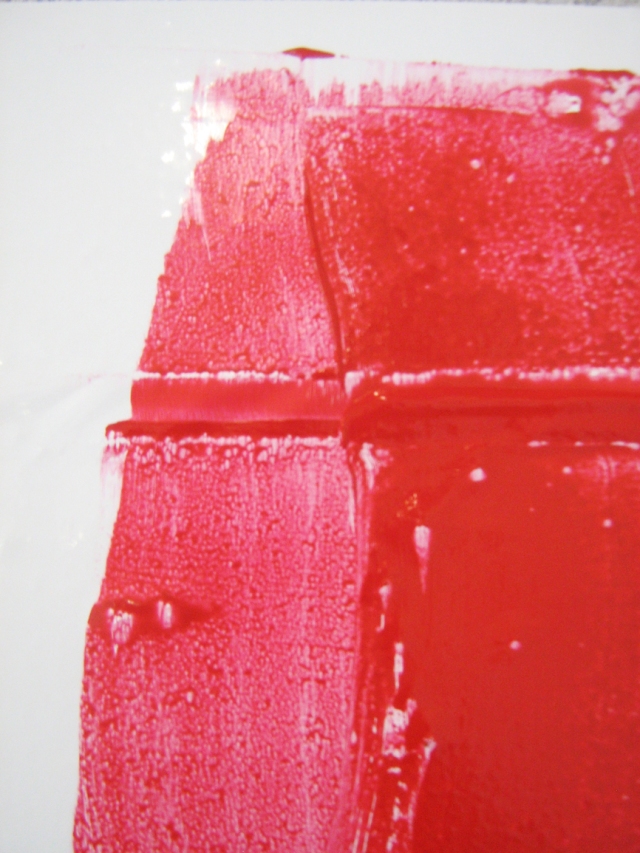 KF:  When you’re not painting or performing, what do you get up to?

SS:  I am also a book binder; I’m doing my Masters in Arts Management at Whitecliffe College of Arts & Design – I’m in my second year.  I’m also a bit of a reader and like to spend time with friends.

KF:  What motives you?

SS:  Passion. I’ve always been a highly motivated person.  My passion drives me because I’m passionate about art.  I’m determined to get to the stage where I’m selling enough art to be a full-time artist.  The desire for success drives me, but ultimately it’s the passion, it’s the love for doing and making art.  It gives me the permission to express through my art work.

KF:  If its 100 years from now and you are an art historian, how would you classify your work, what movement were you part of?

KF:  What are your favourite artists?

SS:  My very first favourite artist was Jackson Pollock. I’ve had a few lecturers that would cringe at me for that.

I also like Albert Olen – his use with already printed media is really interesting,

Judy Miller – she is a brilliant example of a NZ woman in the art world. Judy has a show coming up at Gow Langsford which opens 29th March.

Kazuo Shiraga – he paints with his feet,

Matthew Ritchie he has constructed a whole world of characters his art work is based on.

KF:  What’s coming up in the future?

SS:  I’ve started sculpture using glue you use in a hot glue gun, which will be in a group show at Mairangi Arts Centre.  I’m also working on a body of work to put into a café in May.  I have some ideas for this residency show, but I’m not going to reveal that. The cutting edge work for me comes out of non-permanence. If I can’t bring it into permanent without maintaining that cutting edge then I destroy what I’ve created. It was a huge step for me to create non-permanent and the artistic gain that came from it was huge, there is so much reward from it that I will not lose sight of that.

Selene was also interviewed by Amy Mackinnon from The Aucklander, it makes for a very interesting read

2 Responses to Selene Simcox in Residence – An Interview